Dual System Game Streaming with OBS and NDI® for Linux, Mac and Windows

Before we begin: The setup described in the video can be achieved with any OS for which Open Broadcaster Studio is available, and can be applied for any purpose where you would want to mix and stream the output of one or more systems using a separate, dedicated vision mix and streaming box.

Technical producer Venn Stone, of LinuxGameCast, recently shared a video tutorial on how to set up for live streaming your gaming, with a game system and a dedicated streaming box. Both PCs are running Linux, and using NewTek’s NDI® royalty-free bidirectional IP technology for transport of video, audio and data over standard networks at very high quality and very low latency, rather than using capture cards.

Both systems also make use of Open Broadcaster Studio (OBS), a free open source software for video production and live streaming that is NDI-enabled with a free plugin. In side-by-side testing NDI matched a capture card in keeping up with the video, and competed extremely well for quality.

In the setup shown here, one PC is set up as the “source” or “remote” system. OBS on this system captures the output of an application (Chrome and a game are shown at different points) and sends the video and audio as NDI to the local network. The second PC, also running OBS, is set up as the video production and live streaming system. OBS on that system can see the NDI stream and add it as a source to the production, and stream the production live to the social video network of choice.

This is a very popular setup for gamers wishing to share their personal gaming to Twitch or another social network. Many add their webcam capture from the source system to the production as well, as OBS on the source system can also capture that and send as NDI. 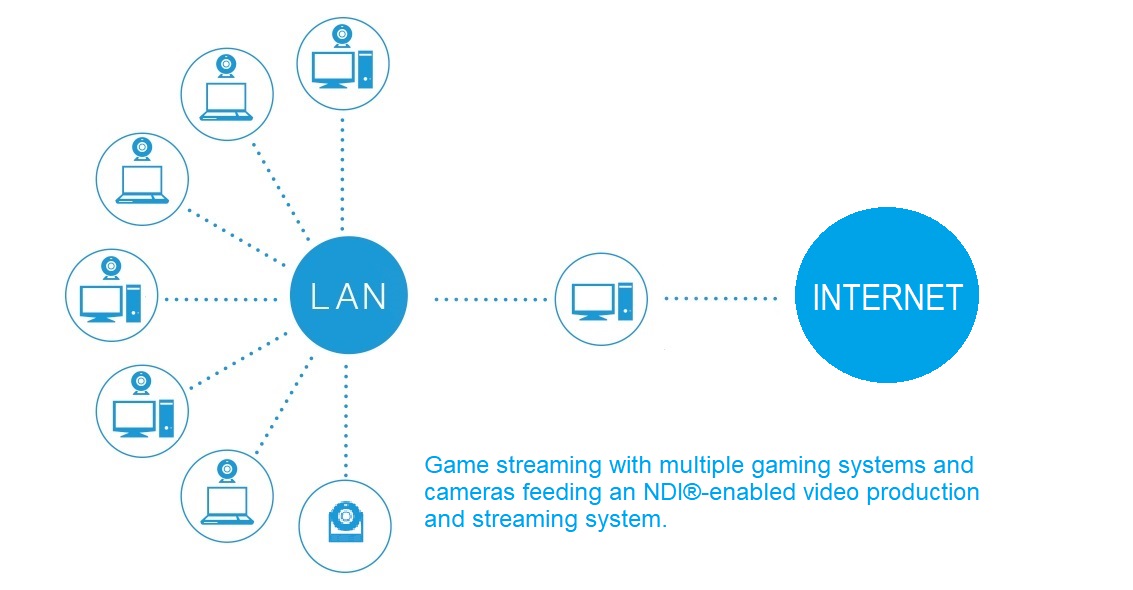 NDI also easily enables multiple gaming systems and cameras to be used as sources over a standard local area network. The cameras can be webcams attached to the systems, but there are also inexpensive video cameras, including PTZ models, with native NDI support that can be directly attached to the network. NDI technology includes autodiscovery, so once any NDI source is active on the network, every NDI-enabled production tool can see and use it.

The gaming system in a dual-PC streaming setup does not necessarily need to be another Linux box; and gaming systems in a multi-system setup can be a mix of operating systems. Mac and Windows gaming systems can be set up to use NDI as described above with OBS, but they can also be set up with NDI Scan Converter, a very simple utility included in NewTek’s free NDI Tools Pack. This will conserve more of the system’s resources for the gameplay, with excellent performance in capturing the display and webcam and sending those as NDI to the network.

We Digress: A Little More on Linux, Gaming and Live Streaming

The Linux operating system appeals for a lot of reasons - many versions available for free, many are open source and easy to customize, there are loads of free and open source applications, you can achieve better performance than on Windows and MacOS, there are plenty of development tools available and much less malware to deal with, etc. The list goes on and on.

Gaming was not at the top of the list a few years ago, but when Valve released Steam for Linux, making a host of Windows games able to run on Linux systems, that changed. With access both to Linux-native games and a big list of Windows games, Linux is a great choice for the game enthusiast these days. And as with any community of gaming enthusiasts, many Linux gamers like to take their gaming jones to social video networks, hence this tutorial.

Worth noting is that even if your platform preference for gaming is Windows, Mac or a dedicated gaming system, a Linux box can be a great option for your social video streaming. You shave off the cost of the operating system, and make more of the system’s power available to the applications you run, which can be very important for video and audio mixing and live streaming. Gaming systems with an HDMI output can be adapted to an NDI workflow with NewTek Spark™ HDMI-to-NDI converters, and converter models from other manufacturers, so they too can be streamed using this type of setup.

Get Started with NewTek Spark™ Plus HDMI to IP Video Converter