NewTek multi-camera live production systems include Animation Store Creator (ACS), a software application that allows you to create custom animations and effects for your NewTek production system from images from your favorite 2D and 3D graphics applications. The procedures shown here with respect to ACS work in 3Play, NewTek IP Series and both TriCaster Standard and Advanced Edition software. TriCaster Advanced Edition is used for the demonstration, and has additional capabilities, so you may see functions on the screens not present in Standard Edition.

Also, you may find it useful to view our 2-Minute Tutorial: Creating an Overlay Transition in Animation Store Creator to learn or to refresh yourself on the introductory details for this application, as some items covered in detail there will be covered only briefly or by mention here.

In this tutorial, our demonstrator shows how to create an animated warp effect. In a warp effect, one of the two video sources involved in a transition is moved, rotated and distorted in 3D space as controlled by two image sequences prepared for the purpose.

The two Warp types available are:

Exit the live production mode to the TriCaster or 3Play opening screen. Select Add-ons from the carousel menu, and then select “Animation Store Creator” from the list of Add-ons. 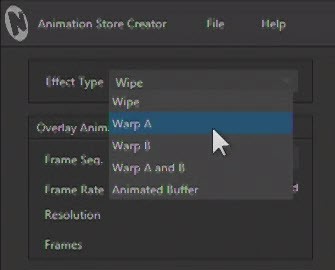 On the Effect Type menu pulldown, select Warp A as the type of effect you wish to make.

Next, we load an overlay image sequence. In this case we are using a grayscale sequence of PNG files of a cloth deforming and flying out of the scene, a cloth simulation rendered in LightWave 3D. This sequence will affect the shading of the warped video during the animation effect.

When the sequence has loaded, be sure to correctly set the Interlace toggle, depending on whether the sequence was rendered interlaced or progressive. Next, we can scrub the timeline and observe the animation. At this step in the process the video is not engaged yet, so we simply see a semi-transparent ghosting of the animation over the B video source.

Next, we go to the controls for loading a Warp Sequence. Rather than images, this sequence is a rendering of 3D data for how to map the video onto the 3D cloth in the same simulation used to render the image sequence used above (UV maps, in 3D graphics terminology). The files were rendered in EXR format from LightWave 3D.

Once the warp sequence is loaded, the video  from source A is mapped to the effect. When you scrub the timeline you will see that now the animation is solid, and the shading of the grayscale image applies to the video as it is warped, so that now we have the effect of a cloth tearing away and rippling as it appears to blow away screen right.

Now that the new Wipe effect is configured, we can take a moment and set the icon for this new effect. To do so, we move the timeline slider to a frame of our choice, and click on Set Effect Icon.

The next step is to select a quality level for the render of the effect. Three choices are available on the Quality pulldown menu:

As detailed in our previous tutorial, you also have the option to include audio in an effect. Once everything is configured and ready, you should save your work as an Animation Store Creator project file.

Once you have saved the project, use the Export menu option, to render and save the effect to your local TriCaster or 3Play, or any other TriCasters/3Plays on the same network that are in live production mode.

We hope this video has been helpful for you. If you have suggestions for other topics you would like covered in a 2-Minute Tutorial, please send us a message. We will see you next time. 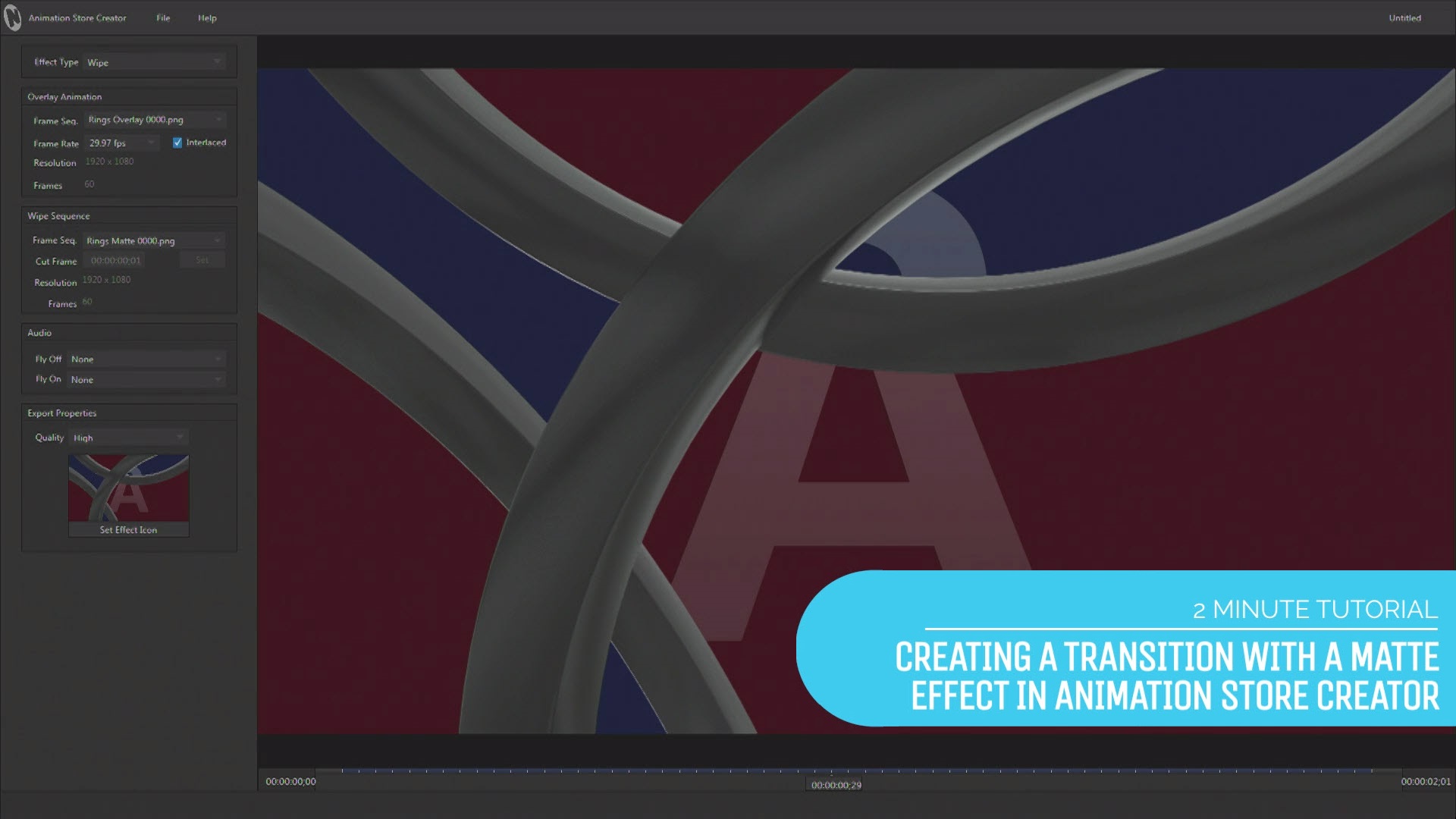 2-Minute Tutorial: Creating a Transition with a Matte Effect in Animation Store Creator 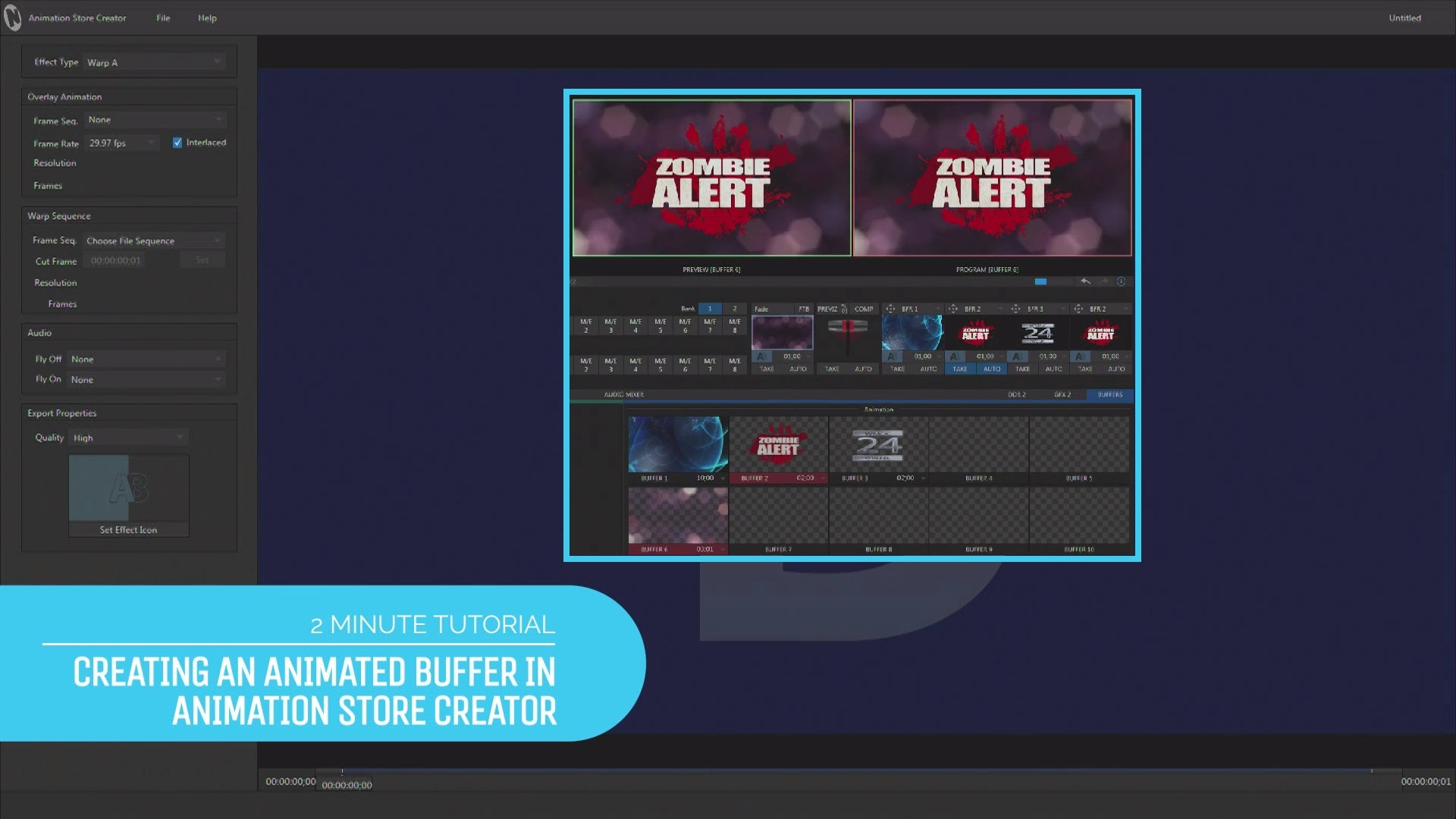