A nurse on her rounds makes a routine check on a maternity patient a few hours after delivery. Suddenly, the new mother begins hyperventilating, infant still in her arms.

Down the hall, another nurse tries to assess the events leading up to a young patient’s asthma attack, but the youngster’s agitated mother interrupts constantly to answer for him.

In a third ward, while a nurse checks the IV drip of a man recovering from a drug overdose, the patient has a seizure. The nurse struggles to manage the convulsing patient.

In each of these scenarios, the nurses have one thing in common: they’re still training for their profession and have never had actual experience with these types of patients—never mind in harrowing situations like these.

Training For The Real World

The reality is, there will be a first time for every situation a nurse faces.

Yet it takes constant, repeated practice to perform expertly amid chaos. The challenge is how to introduce nursing students into a wide range of stressful circumstances, so they’ll learn to handle real-world medical scenarios by instinct—before they’re required to treat real-life patients.

At the Holmesglen Institute in Melbourne, Australia, the answer is simulation-based education that lays the groundwork for the best practices of patient care, while teaching students to cope with real-life unpredictability.

“We could drill students with books, drug calculations, and signs they need to look for,” says Willow Franklin, Simulation Technician for the Immersive Learning Centre at Holmesglen Institute. “But when you throw in situational awareness, you can’t learn that from books. That’s where the real power of simulation comes from.”

At its most basic, simulation capture and delivery technology records video of the role-playing simulation as it takes place, then allows educators to play back the recording, assess and grade each participant. Most can record multiple camera angles and microphones and give reviewers playback options such as a quad-split display to watch several angles at once.

“My issue with a lot of these very specific, proprietary systems is they’re more expensive because they’re so specialized, but more limited than what we could do with a custom solution,” says Franklin.

When it was time to upgrade the Simulation Centre, she figured investing in proprietary “sim” capture technology would limit the students’ learning outcomes—and in turn, stifle Holmesglen’s opportunity to grow the program.

Holmesglen Institute runs diploma and degree nursing courses comprising 2-year and 3-year programs, of which simulation is an integrated component. “Everything we do here is scaffolded, from empirical learning to labs to simulation,” says Franklin.

The $5 million facility itself was designed to integrate simulation directly into the curriculum. It houses four simulated hospital wards, each with two to three patient beds.

Two of the wards or simulation apartments are equipped with observation theaters and A/V setups—one running four cameras and three room microphones, the other with five cameras and four mics—to capture simulations from every angle.

Accommodating more students was Franklins’ primary goal for a video solution, she says, because enrollment numbers are increasing, and simulation is very expensive to run. “Our “sim” days can run between 8 and 12 hours. We need three teaching staff minimum per room. We hire real actors to play patients and family members. So it adds up quickly.”

Having recently been awarded a grant for simulation technology, Franklin wanted to make the most of the award by investing in systems that would keep “sim” costs affordable, while delivering the program to more of this growing audience.

No matter what system they used, they’d need all the mics and cameras, along with patient vital sign displays, to feed into the school’s “sim” capture solution. But Franklin had a longer list of capabilities that were needed to make the investment pay off, and her search led her to TriCaster.

“What I designed this system to be about is three things,” says Franklin. “The first is allowing us to have a better live production that keeps the students engaged.”

Visual capabilities such as real-time multi-camera switching, picture-in-picture or other effects, and titling aren’t common in most sim capture tools. “TriCaster is designed for live production, and production has so many more years of innovation behind it than simulation does,” she says.

“The first part of the process is curriculum creation. We take our learning outcomes for the subject and design a simulation that moves the students toward these outcomes,” says Franklin.

Once it’s approved, Franklin and her colleague, simulation technician Ronen Vansover, begin production tasks including prop procurement. “Our actors improvise, but we give them patient protocols created by our educators—‘this is who you are, these are your family ties, this is why you’re in today.’”

They may add more emotional cues, such as “you’re really sensitive about this topic or reluctant to discuss this one,” according to Franklin, who dove into her first role at Holmesglen Institute several years ago as a “sim” actor, and works closely with the actors to prepare for the level of interaction the nursing students require.

“Once we book the actual “sim” date, we usually have three or four classes go through each day. So we could run the same “sim” three to as many as seven times.”

Secondly, Franklin looked for the ability to review the audio and video from a “sim” directly afterwards, cut together in a smooth, end-to-end vignette for post-sim discussion.

Each “sim” session, mixed in real-time, is output into the observation theatre—with a second output for the live stream. TriCaster M/E (mix effect) compositions allow the operators to create layouts with any combination of the four or 5 camera sources in the room. They also incorporate the vital signs monitor as a picture-in-picture during the session, to hit home the urgency of any scenario to non-participants and heighten their engagement.

“The way Holmesglen Institute produces these “sims” is similar to live broadcast television, where you have to anticipate the planned script but react in real-time to anything that happens,” says Quentin Peel, video specialist at NewTek’s Australia distributor Blonde Robot. (The company supplies NewTek solutions and also trained the simulation techs on the TriCaster workflow.) “The educators introduce elements that force the students to improvise. And that could be different every time they run one.”

For instance, Vansover says that while the techs operate the live video program, they also control the medical mannequin commands. “The mannequins are pre-programmed, but during a session you may advance one to the next stage, or change its vital signs” to elicit action from students.

Franklin believes live production capabilities are so valuable because they increase engagement for non-participating students. “Giving the observing students as clear a picture of the simulation as we can while it’s live means that afterward, when they go into the debrief, they are really switched on and ready for a productive conversation. That’s where the real learning comes in.”

Franklins’ third requirement was about content creation. “I wanted to realize extra value from the simulation by supporting development of video-based educational materials from the content that’s created with all the work we’ve already put in.”

The content-creation aspect of TriCaster, she says, makes her installation different from other “sim” capture tools.

“A lot of the solutions focus on capturing and delivering in-the-moment, so it’s all about live streaming and uploading it to the cloud,” says Franklin. “There isn’t a lot of room for post-production or addressing the need for content creation, which we find very valuable for the best learning outcomes.”

On the other hand, by capturing and recording all camera angles, enabling graphical effects, and making footage available for postproduction, their TriCaster systems allow them to create entire libraries of supplemental learning material.

Ultimately, she says, Holmesglen Institute can cut down the time and cost of producing a simulation, and grow engagement during each one. At the same time, the ability to get more students through gives them a greater return on each sim session.

“Simulation can get so expensive. But it’s also very powerful, which is why we do it,” says Franklin. “The production and streaming flexibility we get by producing our “sims” with TriCaster will allow us to double up on the value proposition.”

But the lasting payoff comes from the variety and quantity of further learning content he and his team can create long after the simulation is over.

“The simulation is truly a vehicle for building a conversation,” says Franklin. “Extracting moments from the simulation as prompts for discussion, reviewing the entire scenario as a complete story either right afterward, or watching at a later date—that’s what makes this a really valuable learning tool for our students.” 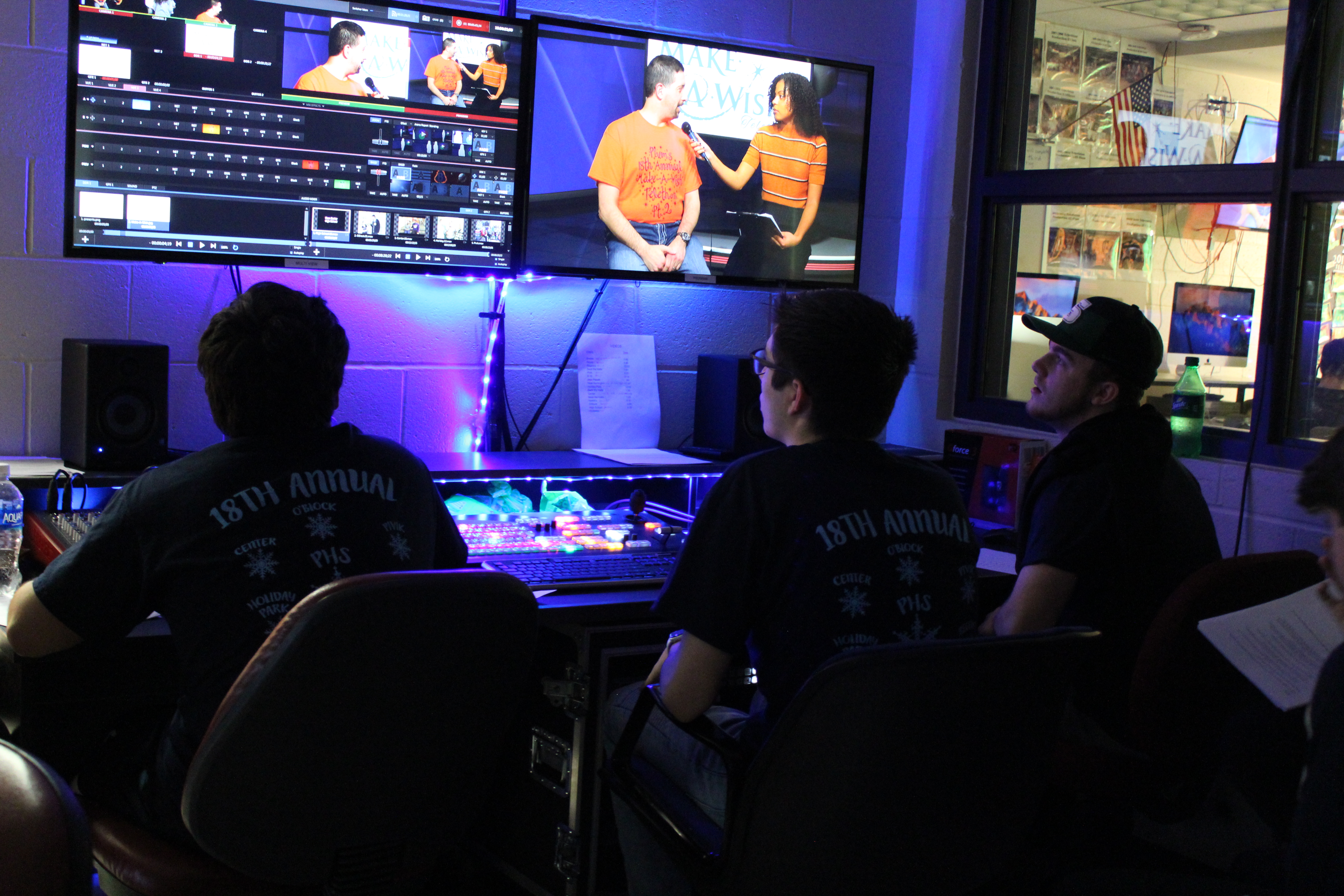