Joe Christensen, owner of Blaze Streaming Media, is the embodiment of the start-up success story. He can tell tales of living in garages and calculating financial burn rates nearly to the hour.

His success is based on a feverish desire to do what he loves and by sinking nearly every waking hour for years into becoming a better, more knowledgeable provider of live streaming services.

Back in 2008, Christensen says he fell in love with the idea of streaming live events online. So he quit a successful job in corporate IT, bought a TriCaster, and began a years-long odyssey into a streaming video production start-up that now sees him as the owner of one of the go-to production groups in the country.

Blaze Streaming Media has provided video streaming for unique events including basketball matches on the Willamette River in Portland, Ore.

Christensen began by streaming conferences with multi-camera setups – the multiple shots and live switching being a component that differentiated himself from the pack of live streamers when the technology was still in its early days. He later moved on to live sports where he showcased the versatility of a live, multi-camera setup for the Women’s Flat Track Derby Association roller derby league and at multiple tennis tournaments across the country. He scraped to turn a profit for years, often offering his services for free in an effort to boost the viability of potential clients. And through years of hard work, he eventually built a successful company producing more than 115 events per year and employing five full-time people and contracting many more.

“If you want to get into this industry, then your onramp is the TriCaster,” Christensen said from his new offices in Southeast Portland, Oregon where he is undergoing a full renovation of a former industrial space to provide his staff with custom workspaces, equipment storage, and a live studio space. “Without NewTek, I wouldn’t have known how to get started. TriCaster is the only easy-to-operate piece of gear I own.”

Christensen refuses to take full credit for all the hard work he put in, and he’s passionate about his stance as an advocate and ambassador of the NewTek brand. It’s not just the products that he believes helped him to this point.

“When I started up, I saw the NewTek Forums as an incredibly valuable resource,” he says. “I was on there every single day, reading every single post on the forums for years. I’m not kidding. I set up an email alert that would send me every post so I didn’t miss anything. Everything on there is gold.”

Christensen used the forums to boost his skills with the tips, tricks, and workflows that other members share with the community. He also saw how individuals would post their setups and receive feedback on how to make their work easier, more streamlined, and just flat out better. And he was heavily involved as user “pdxJoe” in the collaborative aspect of feedback on operations to troubleshooting setups and systems.

“The reality is that you build these skills together,” Christensen said. “There is this knowledge that exists with every operator. And everyone is willing to share because they all love this equipment. So, the knowledge base grows. It’s incredible.”

Further, there is a very real sense of community that exists thanks to the forums. Take, for example, the above-and-beyond effort a member of the NewTek forums made to help Christensen out in New York when he found himself short a TriCaster unit.

“I found myself in a spot at the Javitt’s Center in New York City where the night before an event, it was 8 p.m. and I needed a TriCaster for the next morning,” Christensen said. “I reached out to another operator who I knew lived in the area but whom I never met, and asked him if he could help me out. He responded in minutes. That night we were at the Newark Airport and he was handing me a TriCaster. There was no talk of payment or anything like that, he just knew that the job needed to be done and he helped me out.”

Christensen laughs about that story, saying he demanded that the owner accepts “top dollar” payment later on for the rental, “but even then, he was trying to give me this discount rate. That’s the example of the community in NewTek.”

Once, Christensen found himself in a fairly remote part of Louisiana covering a live sporting event encountering an issue that could’ve been a showstopper with his go-to-live deadline fast approaching.

“I sent out a text message and five minutes later my phone rings,” Christensen said. “It’s a complete stranger who lives nearby and he says, ‘Philip Nelson of NewTek told me to call you and do whatever you need.’ He came out and helped me fix my problem.

That sort of thing just doesn’t happen with any other vendor. I think that culture just naturally exists in the community.

I have local contacts in Portland where we barter and help and run equipment around. It’s just sort of known that if you need it I’m there. We just help each other out.” 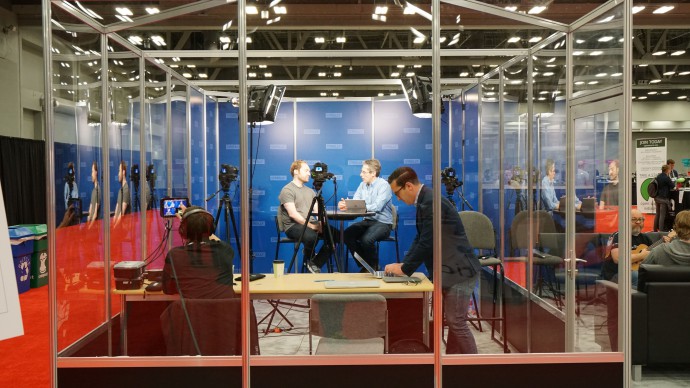 The final part of the forums where Christensen found value is what he calls “literal gold” because he has connected with clients and partners that result in paying work.

“As much as I owe the TriCaster line for where I am today, I also owe the people that innovate the products and the people who are as passionate as I am about the products,” he said.

NewTek began its forums to provide a place for users of its products to connect, and to interact with those individuals if they had questions or concerns.

“We look at what the forums have become and are really humbled by it,” said Donetta Colboch, vice president of Marketing for NewTek. “It’s this testament to the type of people that NewTek products attract. Our users are incredibly helpful, thoughtful and passionate individuals. They’re not just users. They are legitimate fans and advocates and ambassadors and believers in what we are doing. The quality of the discussions on the forums are incredible, and we’re both proud and grateful that people spend the time to master and tutor others on the products we create.”

The NewTek forums are accessible for free at http://forums.newtek.com/

The community has over 87,000 members and contains 1.46 million posts in over 146,000 threads. Subforums on the site include general community discussion, TriCaster advice, tip and tricks, product feature discussion and requests, and multiple sections for discussion on the IP Series, MediaDS, NDI, 3Play, TalkShow, LightWave 3D and other NewTek products.