LiveSports, LLC specializes in producing high-quality, TV-level live broadcasts for sporting events all over North America. The company has produced many different sporting events from football and field hockey to eSports and tennis, and poker for the World Series of Poker.

Meet Jef Kethley, president of LiveSports, LLC. Three years ago, his company spun off from longtime NewTek reseller PIZAZZ, to exclusively handle the mounting live sporting event production work his organization was being asked to do. We asked Jef to share his live sports production experiences.

Jef began by explaining what LiveSports, LLC does. “The majority of our work recently has become men’s and women’s professional tennis tournaments. We produce over 45, week-long tournaments per year. For these tournaments, we broadcast from the first ball drop to the final championships.”

“The main clientele we serve and feed is over the Internet, although at times we feed traditional linear TV such as the Tennis Channel via satellite truck uplinks,” he said. “Even though we are operating a ‘small truck’, our production quality is on par with the larger 53’ TV trucks producing only the semi-finals and finals on the weekend.”

He went on to proudly state, “Without question or doubt, LiveSports produces more live tennis yearly than any other production company in North America. I never thought I would be saying that 5 years ago!”

There are no post-productions after the events LiveSports LLC televises. “Do It Live and Do It Right the First Time” is our motto. That, and I can’t stand editing video,” he revealed.

LiveSports, LLC routinely produces 10-12 hours of live broadcasts per day. Some days are longer and a few are shorter as the tournament winds down. “We have a very different production model than many other companies in the video business. We operate our events out of tour buses, similar to what you would see on a rock ‘n roll or country music tour.”

Jef’s background is in sound and lighting touring. “On music tours, you have to be efficient, mobile, and self-sufficient. The tennis tour we produce we approach the same way. Our tour buses have full master control setups built out in the front of the bus with living quarters in the back for up to 8 crew members,” he explained.

“Because many of these events are back to back to back, we have a separate ‘smaller’ production vehicle called ‘the Beast’ that ‘advances’ the next event on Friday and we move the bus over on Sunday. The crew can finish up on Sunday’s final and get some rest on the way to the next event. They wake up the next day and start all over again.”

The Beast Advance Crew has already cabled and tested everything over the weekend, so the changeover happens rather quickly, with power, Internet, and fiber up in under 20 minutes.

“One of our buses just returned home after being out on the road since July. That is five months of being on the road. We couldn’t do it without an outstanding crew. Most freelancers we hire from time to time cannot believe the schedule our normal crew members maintain. It is truly insane at times, but we have fun at it,” he said.

When asked about his history with NewTek products, Jef shared his personal career story. “I started using the original NewTek Video Toaster on the Amiga platform many years ago. I have always embraced new technology and used that technology to our advantage to produce high-level events without the high-level price. We have been using NewTek products for decades now.”

He continued to explain “NewTek has always stood behind us on everything. We have many friends around the company. It is great to be able to reach out directly to engineering if we need to. While that happens very seldom, it is comforting knowing that the people at NewTek have our backs.”

How does LiveSports, LLC take advantage of IP video? “We already run fiber Gigabit Ethernet connectivity around every event as part of our normal workflow. We have been using Dante audio over IP and Comms over IP for years.” Jef said.

“Having the ability to do video over IP is just natural. The flexibility NDI gives us to setup another camera just by plugging into the network is amazing. Even with a 1000’ Tac12 fiber running from the bus to the site, we can tap out the fiber count rather quickly. IP gives us more room to grow without having to pull more wire or fiber. That is a huge thing for our workflow.”

Typically, LiveSports, LLC uses 4-8 IP video sources. “We use LiveText for some CG elements via NDI, we also use CharacterWorks CG via NDI for more elaborate and data-driven graphics. We also have recently been feeding our LED scoreboards onsite with the Renewed Vision Scoreboard product. Its NDI output is used to QC the live scoring from the courts and also to feed into our commentator’s confidence monitor,” he said.

Jef revealed his solution for monitoring IP inputs. “We created a custom 4x4 multiviewer using an M/E out of the TriCaster to give the announcers not only just Program Out, but also previews of the 3Play A and B outputs (for instant replay and slow motion) and the Renewed Vision Scoreboard feed. At an instance, we can re-route any of the 12 inputs going into TriCaster to the announcer’s monitor feed. That monitor feed is a Microsoft Surface Pro that is also used at times for telestrating over NDI.” 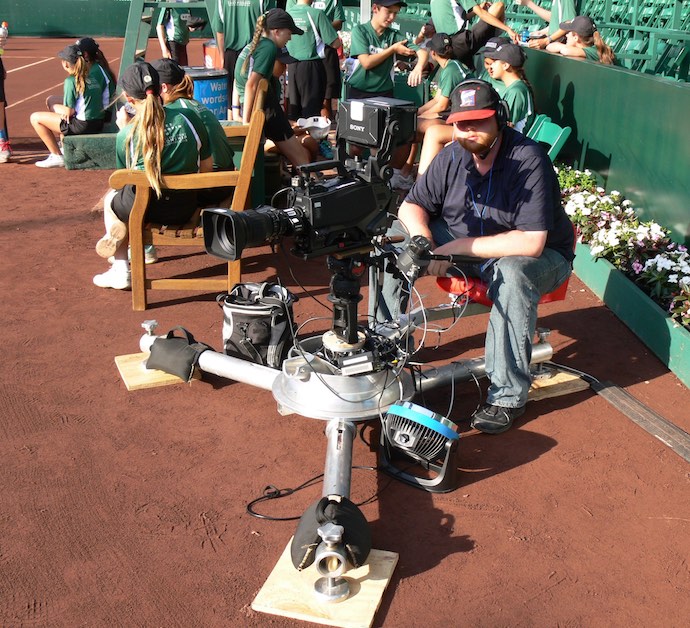 Jef went on to explain another new NDI solution. “One of the other ways we are using NDI is for on-site distribution. We are frequently asked to provide video feeds to TVs around the venue. Instead of running dedicated SDI cables and format converters, we jump on the nearest network switch/port and drop our small custom NDI2HDMI boxes running NewTek’s NDI Monitor (an app using NDI to display broadcast sources on computer monitors) to feed into the TV HDMI input. Some of those drops are even over Wi-Fi. Because we also set up our own mesh-style WiFi network at every event, we can control the QOS to every spot we need connectivity.”

Is Jef mixing NDI and non-NDI IP sources? “Recently we have used NewTek Connect Pro to convert the streaming output of our Panasonic PTZ cameras into NDI sources, so the answer is yes. We have 4-6 HD inputs via fiber converters into the TriCaster 860 along with 2 channels from our 3Play filling up the SDI inputs. When Advanced Edition (AE) added those extra 4 NDI inputs to the mix, everything really started getting interesting. The routing flexibility in AE2 is just amazing.”

“We use LiveText for some events on a Surface Pro, controlled by both XML and CSV data feeds with custom XKeys controllers we developed for manual input controls. We rarely ever have to reach for a mouse to run the graphics. We also use CharacterWorks to monitor three remote XML feeds and build motion graphics for stats and scoring, all in real time over NDI,” Jef revealed.

For the last 3 years, LiveSports has been using up to 6 Panasonic AG-HPX370 camera kits with fiber video links back to master control. The company deploys Panasonic AW-HE130 PTZ cameras for wide and beauty shots. The crew is still using some fiber for the cameras but is now using NDI more and more every day.

What formats does Jef like to work in? “As a policy, we keep our formats similar across all the camera inputs. All cameras are set to output the same 720p or 1080p format. We just recently started using NDI Camera (an app that turns a cell phone video camera into an NDI source) on an iPhone7, and a mobile to feed some different shots into the productions. 720p over NDI is completely wireless, painless, and simply amazing.”

Part Two of Jef’s story will share further details on how his company uses NewTek’s technologies to produce high-quality television and Jef’s vision of the future. 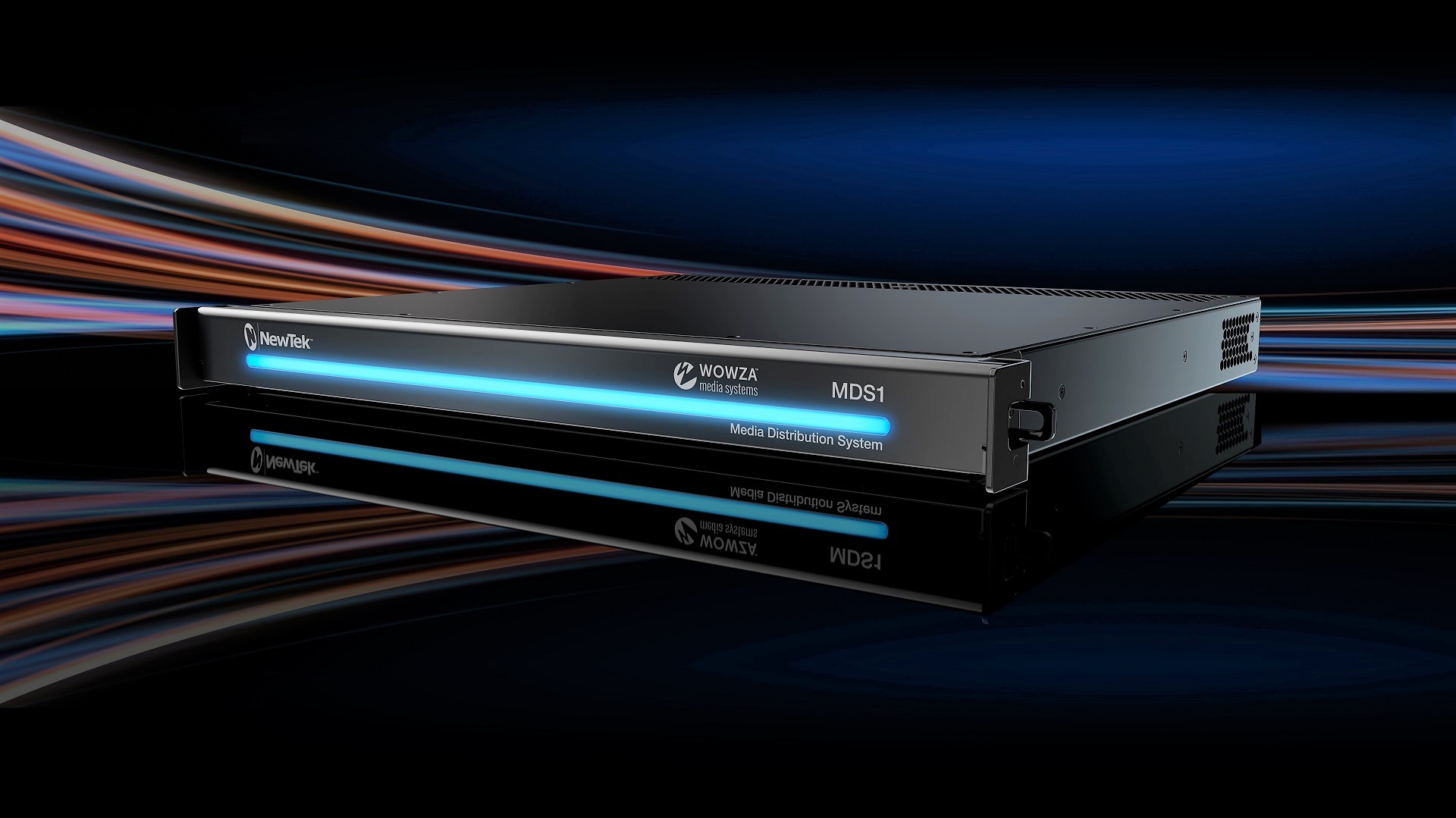