Physical fitness is the heart and soul of CrossFit. Developed and introduced in the early 2000s by Gregg Glassman, CrossFit’s goal is to inspire participants to take a broad, general, and inclusive approach to getting in shape. To achieve that, workouts incorporate constantly varied functional movements performed at relatively high intensity.

But CrossFit transcends physicality: The term has come to define the global community of those who do the workouts together. Leveraging video and social media capabilities to help that global community thrive is where Joe Novello comes in. He’s coordinating producer with the unit responsible for CrossFit’s Games, a worldwide competition held each year that culminates with an award for the best team as well as titles for fittest man and fittest woman on earth.

The main focus of the 40-plus-member CrossFit media team is to reinforce the sense of community rooted in a large group of determined individuals striving toward an ultimate goal. But, like CrossFit itself, the task at hand is not for the meek: In 2015, for example, the first stage of competition alone – called the Open – drew some 273,000 participants from more than 85 countries.

“We wanted to demonstrate the expanded scope of participation with live links from gyms located around the world,” Novello recalls. “We had ambitions, but we were limited. The economics of the traditional broadcast model would have kept us from tapping into our worldwide community the way we wanted to. It’s simply too expensive.”

In many ways, communication is as central to CrossFit as the quest for physical excellence.

Every morning the workout of the day, or WOD, is posted on the CrossFit website that can be accessed free of charge by anyone regardless of skill level or location. The CrossFit-affiliated gyms also receive the WOD but often modify it or create their own WOD based on what people at that particular gym are focused on, weather conditions, and other factors.

Whatever the workout particulars, record keeping is a CrossFit ethos. “If you’re going to test fitness and find out if you’re really fit you need to be able to see if you’ve made progress,” says Novello. “CrossFit is all about improving fitness and being able to measure it in such as way that you can see you’re improving. It needs to be measurable, observable, and repeatable.”

Stridently recording and measuring progress is a core component of CrossFit. While traditional health clubs tend to emphasize solo workouts, working out at a CrossFit-affiliated gym, or as an individual, requires adherence to the WOD as specified on the CrossFit website or by the trainer at the gym. That’s what gave rise to the competitive spirit that has become the CrossFit Games.

“That’s how the Games got started,” says Novello. “People were doing similar workouts and recording their scores, which laid the foundation for a very competitive atmosphere.”

The first games took place in 2007 down the road from Santa Cruz, California, the birthplace of CrossFit, in the town of Aromas. The event is recalled as a beer blast and barbecue attended by 70 people who wanted to see how they stacked up against people from other gyms.

Today’s games are as different from the first year’s event as the organization is from the days of its inception. Founded in the early 2000s, CrossFit has expanded rapidly to nearly 14,000 affiliated gyms today. The Games mirror the organization’s growth. A casual competition in 2007 has evolved into a worldwide event, the first phase of which drew more than a quarter of a million hopefuls in 2015. Approximately 1,000 athletes emerged from that round and moved on to the second stage of competitions, the regionals, which in 2015 were held at eight locations throughout the world.

“That’s where it really gets serious,” Novello says.

Then, in the last week in July, the top 40 men and women and teams consisting of three men and three women compete in the third and final stage of the Games in the event’s new home, Carson, California. The week is a grueling test, not only of each competitor’s ability to perform but also to recover and sustain themselves over several days. “They make it look easy,” says Novello, “but it would crush most people.”

Making it look easy to bring together a worldwide community of people who are, in his words “very strong, very loud, and very involved” fitness enthusiasts is Novello’s goal. “Our job is to encourage everyone to participate in the big picture,” he says. “Everything we do is in support of everyone’s dedication to pushing themselves to become better.” 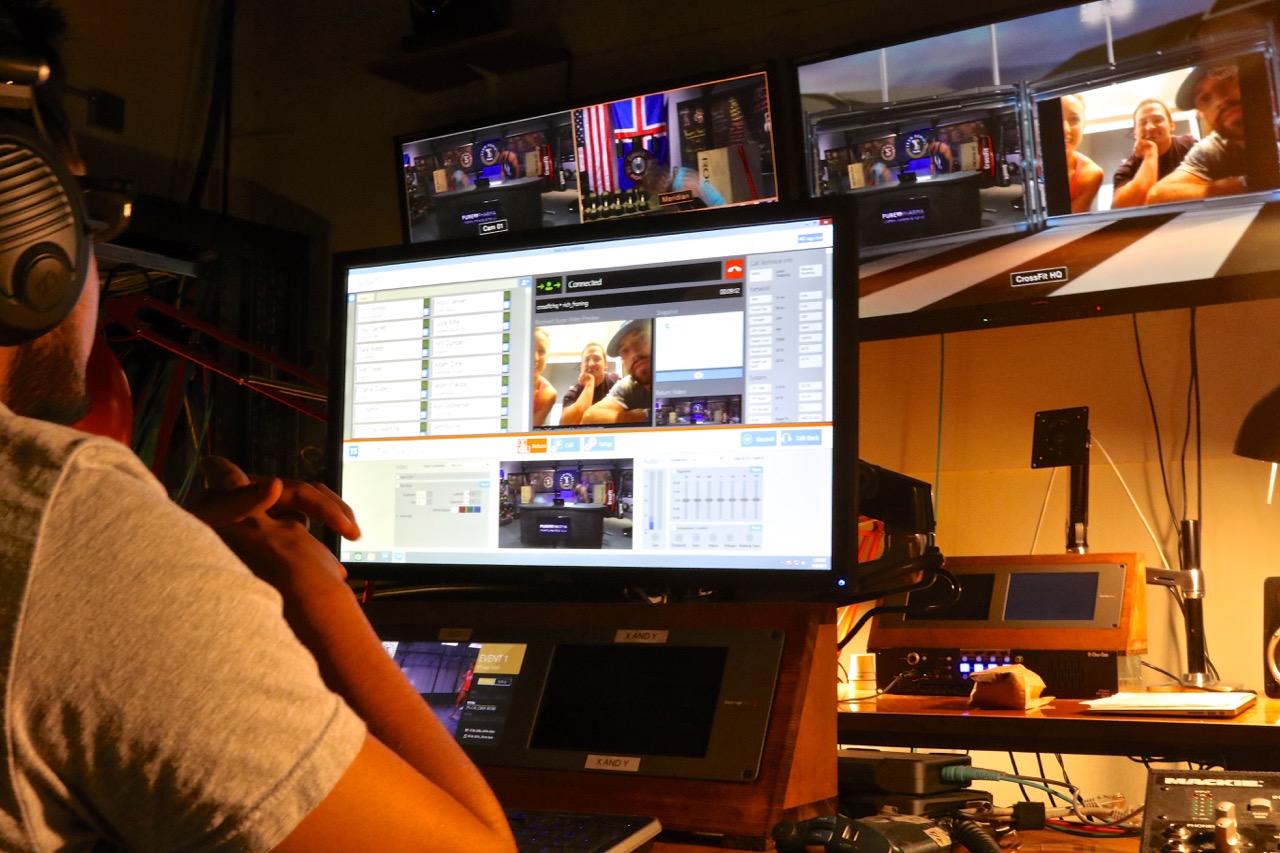 To achieve its goals, the CrossFit production team invested in a workflow consisting of tools and technologies that simplify and economize the process of producing and distributing quality video content.

The core strategy during the Open is to welcome participants from around the world via live feeds; accordingly, the workflow revolves around the television trucks CrossFit rents from NEP, each equipped with switchers, audio equipment, and cameras.

For shooting, five LDK 6000 cameras and two Panasonic HE 130 cameras are used, each of which is connected to a switcher. The six Shure handheld microphones that are used are connected through a Mackie Audio mixing board.

Finally, output from the mobile unit is fed into a Teradek Cube encoder, which connects to a Zixi Broadcaster that feeds the CrossFit program to the organization’s website and YouTube channel simultaneously.

The popularity of TalkShow immediately following its release meant that supplies were severely limited. Novello said he was so confident in the workflow he and his team had designed that his technical team finagled a way to the top of the product’s waiting list so that they’d have it in time for the start of the Open remote productions.

“Without getting outrageous with satellites, we were looking for a solution we could use to link up live connections,” he said. “We had thought about using Skype, and then as we were planning for 2015, we heard about TalkShow and it made sense for us. So far, nobody we’ve asked to participate has said, ‘What’s Skype?’” 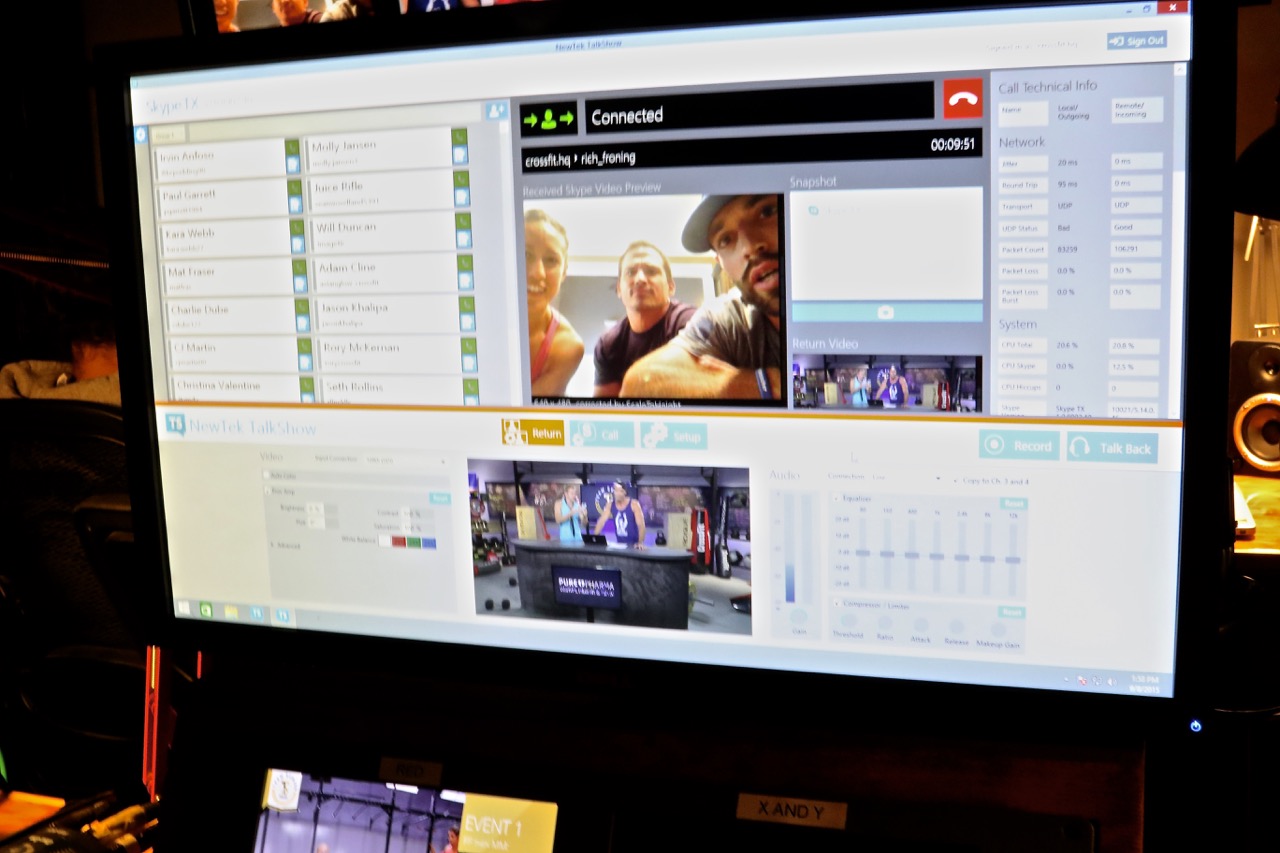 “The job of the production team is to promote and inform internally and externally what’s going on around the CrossFit Games,” Novello says.

That’s particularly challenging during the Open phase. For five weeks, CrossFit announces one workout per week for each participant to do and record. “Preparedness is one of the key concepts of CrossFit,” Novello says. “If you are truly fit, you’re prepared for any workout.”

In 2015, as workouts were announced and demonstrated by top athletes, TalkShow, which enables live Skype interviews to be incorporated into the production, was used to connect a truly global range of locations, including Georgia, Canada, and Ecuador. Within minutes of posting on CrossFit’s website, the videos were viewed by 90,000; within the first 24 hours, Novello estimates the number surpassed the half-million mark.

“Once we knew how successful our new system was I asked our team what the most remote CrossFit location in the world is,” Novello says. “So we linked to the Cook Islands in the middle of the Pacific for a performance by dancers and drummers. It truly demonstrated global participation.”

Completing the Circle of the Story

Novello says that once his team realized how effective the new system is they began to use it more broadly. The CrossFit Games Update, for example, is a weekly program produced in the in-house studio to keep everyone – true to the show’s name – updated. “Our workflow makes it easy for participants from all over the world to interact with our studio hosts,” Novello says. “If we’re talking about top scores, we occasionally Skype someone in who is doing really well. We also live stream the regional competitions and, of course, the Games.”

Novello is pleased with the way the workflow has made it possible to include participants from around the world in WOD announcements and demonstrations.

But when it comes to giving a deeper meaning to what’s known in CrossFit parlance as a Hero workout, pleased is an understatement: He’s thrilled. Hero workouts are named in honor of a police officer, firefighter, or military service person killed in the line of duty. Hero workouts are sprinkled throughout the training season and were also part of the 2015 regionals as well as the Games.

“We recently live linked to a widow whose late husband was one of the heros,” he says. “Thanks to our video capabilities she was able to speak directly to participants about what CrossFit meant to her husband and how his death and having the Hero workout named after him had inspired her and the family to do additional community service work.”

Novello says those kinds of live links make it possible for his team to deepen the level of connections with the global CrossFit community.

“We can have our commentators tell a story, but connecting directly with someone from the family about what that workout meant forms a much deeper and more meaningful connection,” he says. “Our job is to tell the stories behind the workout. Who was this person? What was important to him or her? Who is their family? Linking to the survivors is a powerful way to complete the circle of a story.” 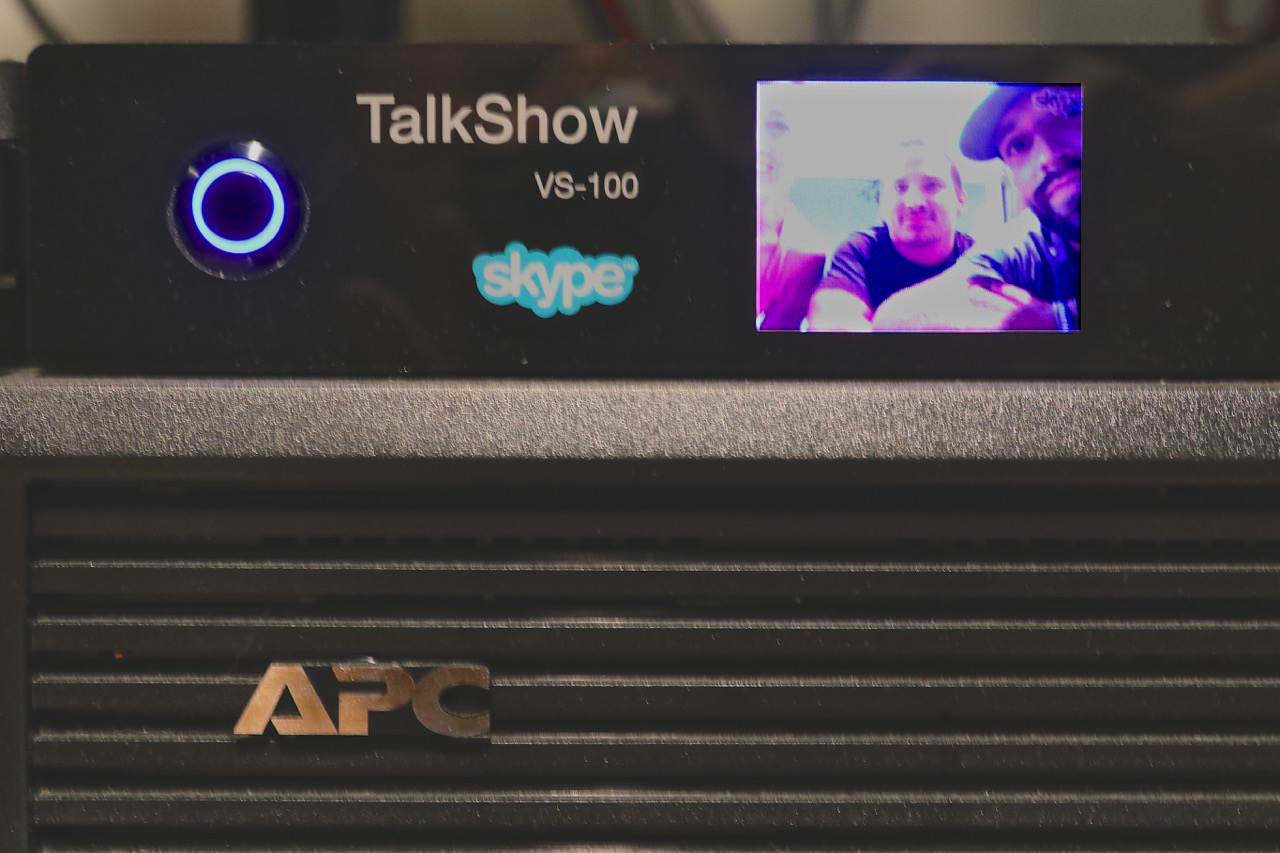 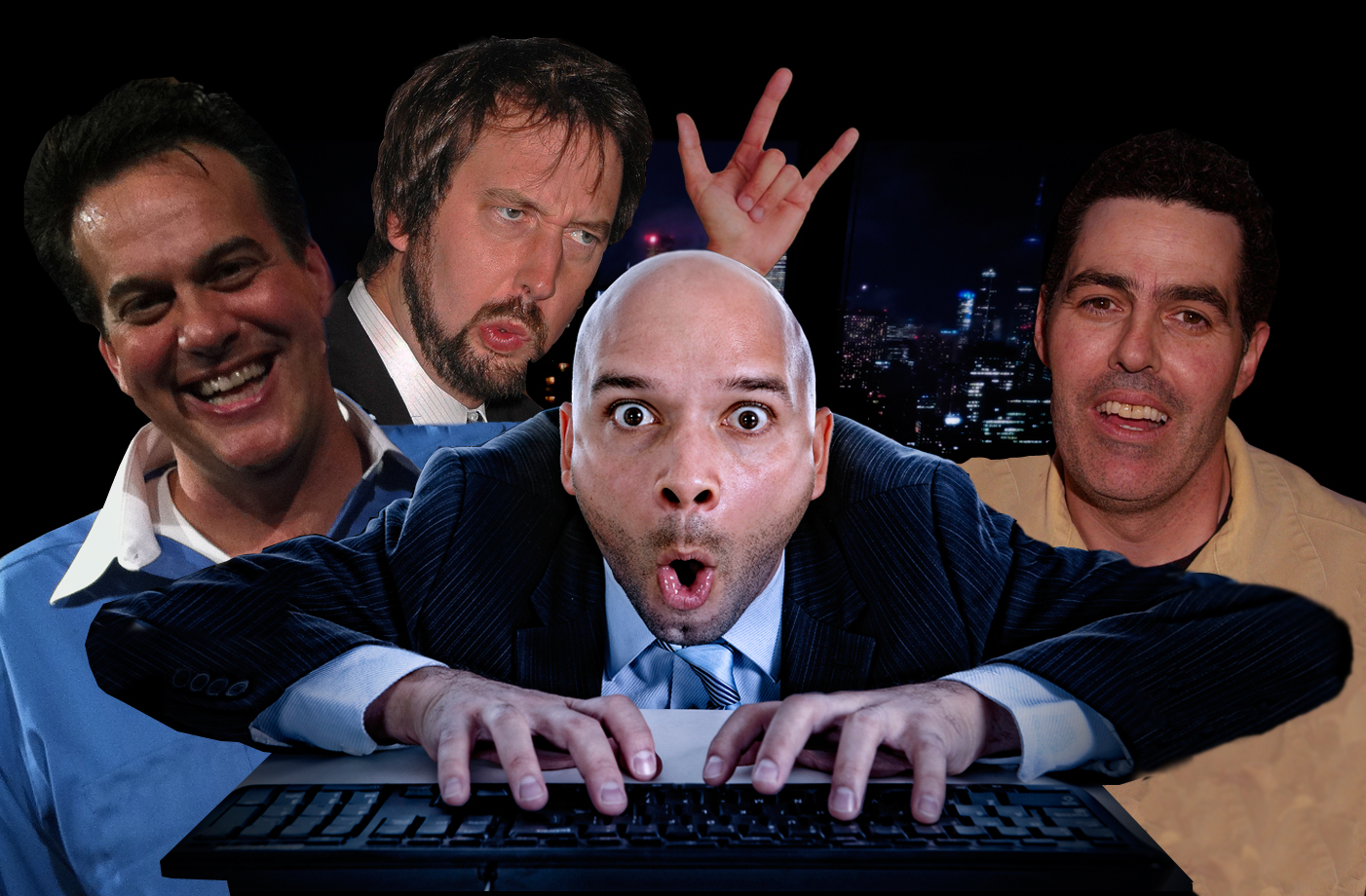 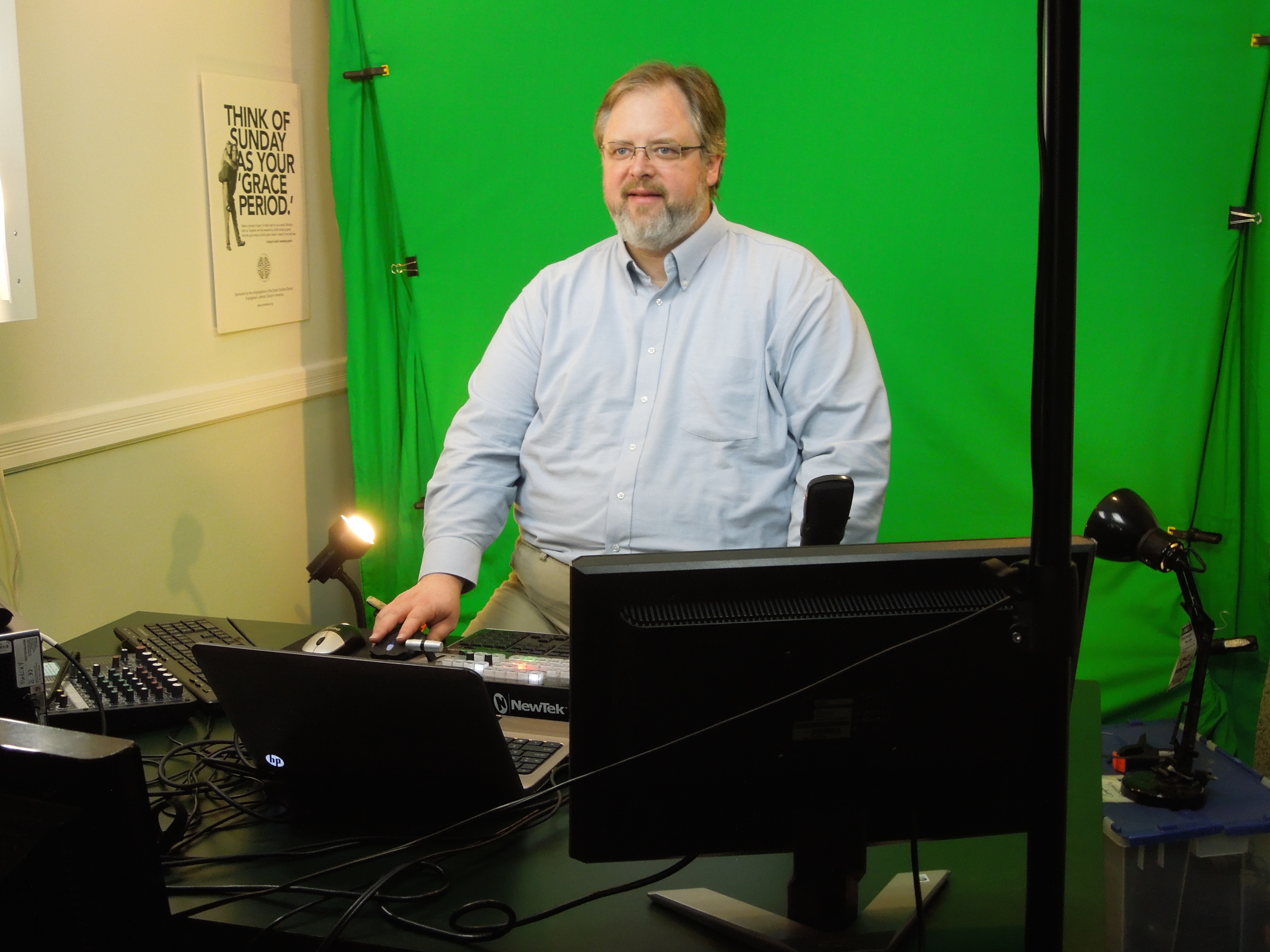